More than anywhere else on your body, your face will begin to show the signs of aging to the world. Although wrinkles, sunken features, and sagging skin are typical signs of facial aging, there are some amazing options to address or prevent them. One of the most popular cosmetic surgical procedures that can address the signs of facial aging in the U.S. is the facelift.

However, some patients may decide that a surgical facelift is too invasive for what they currently need. In such cases, a liquid facelift provides the ideal solution to the initial signs of facial aging. Dr. Derrick Gale, a highly trained facial plastic and reconstructive surgeon, provides his expertise for both facelifts and liquid facelifts in the Riverton and Salt Lake City areas of Utah.

If you would like to learn more about the fantastic benefits of liquid facelifts in Salt Lake City and Riverton, we invite you to schedule a consultation with Dr. Gale and his team today!

With a focus on improving both form and function, Dr. Gale applies experienced aesthetic judgment and surgical expertise to achieve each patient’s individual cosmetic and functional goals. While delivering the highest level of care and expertise, Dr. Gale and his team maintain a down-to-earth and comfortable atmosphere to put you at ease.

What Is a Liquid Facelift?

During a liquid facelift procedure, Dr. Gale will precisely inject dermal fillers into areas of the face to plump, fill out, and smooth the skin. Which fillers Dr. Gale will use depends on your specific needs, but common fillers used include Kybella ®, Sculptra®, Juvederm®, and Restylane®. Dr. Gale may also use Botox® in the upper face or underneath the jawline can also improve your results by relaxing your facial muscles to diminish and prevent fine lines and wrinkles.

What can a liquid facelift do?

The primary goal of a liquid facelift is to reduce and eliminate fine lines, wrinkles, and sagging skin to give you a more youthful appearance. A liquid facelift can also address several other aesthetic age-related issues by:

Who Is an Ideal Candidate For a Liquid Facelift?

People who will be best served by a liquid facelift are those with small skin sagging levels and only the initial stages of wrinkles and fine lines.

For patients with more extensive wrinkles and loose skin, such as jowls around the neck and throat, a surgical facelift will perhaps better suit your needs.

Patients entering into liquid facelift should have realistic expectations about the procedure’s results and have a positive outlook on their physical appearance.

How Does a Liquid Facelift Differ From a Surgical Facelift?

Both the surgical facelift and the liquid facelift aim to do mostly the same thing – reduce the aging effects of the face. However, they achieve this to varying degrees and with different methods.

The surgical facelift is an operation involving anesthetic, incisions into the skin, and significant recovery time. During a surgical facelift, the surgeon makes tactical incisions along the jawline, behind the ears, and hairline, through which the skin of the face can be stretched, cut, and reattached, thus smoothing out the remaining skin.

The results of this procedure are stunning. However, the process itself can take up to two to three hours, and patients generally require one to two weeks off work, with another six weeks to fully recover from the operation.

On the other hand, the liquid facelift is a non-surgical procedure that Dr. Gale performs without anesthetic in-house at the ENT Center of Utah. During your liquid facelift, Dr. Gale will inject certain areas of the face with the proper dermal fillers to provide the results that you are looking for.

The lips, forehead, cheeks, and nose are areas commonly targeted during a liquid facelift, with the procedure taking between fifteen to thirty minutes. After your appointment, you’ll be able to resume your daily routine straight away.

Should I Choose a Surgical or Liquid Facelift?

The results from a surgical facelift are more significant than those of a liquid facelift. A surgical facelift takes longer to perform and has six to eight weeks of downtime. That said, it is also a long-lasting solution. In contrast, there is no downtime associated with a liquid facelift, and the results last around 6 months. The suitability for each procedure depends on your needs and preferences.

The more advanced signs of aging, such as very loose skin and prominent wrinkles, will be better addressed with a surgical facelift. However, those who only wish to delay the onset of aging signs or slightly rejuvenate their appearance, a liquid facelift will be an ideal solution. 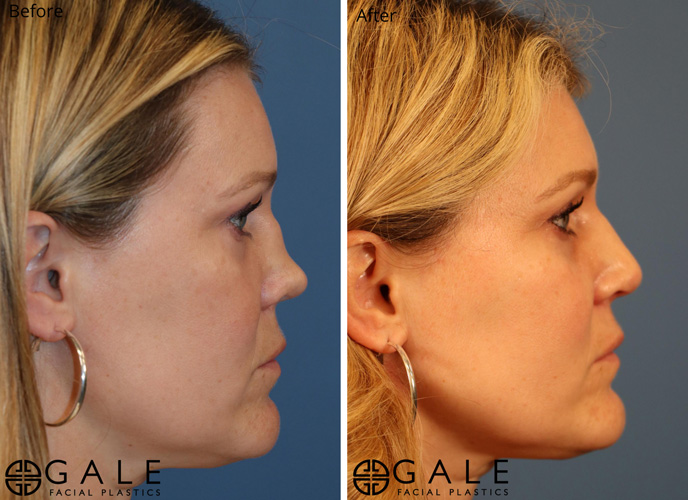 Trust Dr. Derrick Gale to help you achieve your goals, whether they are aesthetic, reconstructive or both. View our before and after gallery to see the surgical skill and technical mastery of one of Utah’s leading facial plastic and reconstructive surgeons.

What Can I Expect Before, During, and After my liquid facelift procedure?

Before your procedure, the most vital step is to decide whether the liquid facelift will sufficiently address your aesthetic desires. This is best done in a one-to-one consultation with an experienced, reputable plastic surgeon such as Dr. Gale to determine your suitability for a liquid facelift.

If you do indeed determine that a liquid facelift will provide the results you desire, you should avoid any intense sunlight to ensure you have no burning or leathery skin leading up to the visit.

You should lead your normal active, healthy life and be adequately hydrated so that your body can display the full results of your liquid facelift as soon as possible after the procedure is completed.

Your liquid facelift appointment will be fast and painless – most patients say the needles feel like mild insect bites. For those sensitive to sensations, we can apply a numbing cream to eliminate any discomfort.

Once you arrive at the clinic, Dr. Gale will discuss any last-minute questions you may have and then administer your dermal fillers to rejuvenate your appearance. Dr. Gale does all liquid facelifts personally, so you can rest assured that you’ll be in expert hands.

You can immediately leave the clinic once your liquid facelift has been completed. We suggest refraining from intense exercise for twenty-four hours to allow the fillers to settle.

Also, avoid putting any pressure on your face (i.e. lying face down) for a few nights, just to allow the fillers to settle and fix appropriately.

Take the Next Step

Dr. Gale of the ENT Center of Utah is a highly respected, trained, and certified plastic surgeon. Come see for yourself why Dr. Gale’s patients love their experience and results! If you are considering having a liquid facelift with dermal fillers in Salt Lake City Riverton, UT, we invite you to reach out to Dr. Gale at 801 758 0428 to arrange your consultation and find the ideal solution to your concerns with a leading facial plastic surgeon.

Most of the swelling from a rhinoplasty procedure will go down within the first few weeks. It may take many months before the final shape of your nose reveals itself. As you recover, you will continue to meet with Doctor Gale. If there are any issues of concern, you can bring them up with him during this time.

Patients recover immediately from the procedure – it is non-surgical, requires no anesthetic, and requires no downtime.

Can I travel after the procedure?

Yes. You can drive yourself away from the clinic, and travel by any means you wish immediately following the procedure.

What risks are associated with a liquid facelift?

When performed by a certified, trusted, and respected facial specialist, a liquid facelift is a perfectly safe, highly satisfactory procedure. Nevertheless, when done by an inexperienced or untrained individual, liquid facelifts can lead to excessively stretched skin (particularly the lips), unnatural appearances, and possible nerve damage if needles are administered incorrectly. Choose a highly trained facial plastic surgeon like Dr. Gale, and the results from your liquid facelift can have you beaming.

Can I Combine a Surgical Facelift and Liquid Facelift?

Yes. You can discuss with Dr. Gale about how to best achieve the results you desire, which sometimes means a combination of both procedures.